Harav Rubin is that unique blend of spiritual leader. Having studied under some of the past generations greatest Chasidic masters, he has developed a special approach that is both warm and enlightening.

After serving as a Rabbi and educator in Brooklyn New York, where Rabbi Rubin opened the very first Orthodox Jewish School for adolescent boys with learning difficulties, the Rabbi came to England in answer to a call from the South Manchester Community. This happened over twenty five years ago and his arrival was considered a huge breakthrough for Jewish leadership in that area. This difficult decision was made with the blessing and coaxing from some of the greatest Rabbinical Sages of that time.

In the quarter of a century of the Rav’s service the community was transformed, and many students who lived in its proximity began their Jewish awareness under the Rabbi’s understanding guidance.

Now housed in a new centre in Bowdon, the community is seen as one of the fastest growing Jewish Congregations in the north of England.

In terms of working with the wider community, Rabbi Rubin has spoken at many civic events and works with representatives of other faiths towards communal understanding. He serves as the Jewish Chaplain to the Manchester Police Department, as well as having been Chaplain to Christie’s Hospital of Manchester. The Rabbi hosted a Royal visit of HRH Prince Charles upon the opening of the community’s new facilities (a historic first). Rabbi Rubin visits schools throughout the North West speaking on many subjects and bringing an awareness of the Jewish religion to youngsters of all backgrounds.

His writings have long been cherished by the readership of both the Jewish Tribune and the Hamodia, and he has had published five volumes of his heart warming words. His three-volume work on the Psalms, “Rhythm of the Heart” has appeared in a boxed set and it’s uniquely sensitive message of hope has found its way into many homes. This work is now being translated into Spanish for publication in South America. “The Rabbi’s Journal,” a matchless insight into the life and work of a communal Rabbi, has long been popular, and continues to instil hope into the hearts of thousands of readers. This wonderful book is given to patients in hospitals in several countries.

The Rav’s sermons and droshas are well known to be filled with wit, humour and spiritual insight, and he is a sought after speaker at many communal occasions.

In Ellul of 5770 Rabbi Rubin took on a new challenge by announcing that after twenty-five years of leadership in South Manchester he was moving to North Manchester to open a new educational centre. The thrust would be a new school that would help youngsters who find education in larger settings too difficult. The main focus of this new project is to educate each child at their unique level. The new Mesivta has opened with great interest from all segments of the Torah community and the warmth of Rabbi Rubin and his devoted staff has brought the talmidim a new sense of positive attainment. 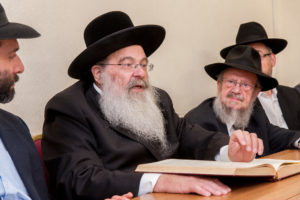 Upon the Rabbi’s move he was asked to take on the spiritual leadership of a newly founded Kehilah in Prestwich which is called Adass Aish Kodesh named in the memory of the Holy Piesnetzna Rebbe Ztl, the martyred last Rebbe in the Warsaw Ghetto and renown pedagogue between the two World Wars. In a short time the Bais Medrash is now filled with congregants who are happily bonding with their Rav through his dynamic Shiurim, and warm support. The Shul has already gained a great reputation for the chasidisha vibrancy of the Tefilahs and the friendship engendered through the Rav’s guidance.

Rav Rubin is married to his well known Rebbetzin and together they have been blessed with Torah generations that include Rabbonim, educators, renown Klei Kodesh that all walk on the path so lovingly set by their elders.